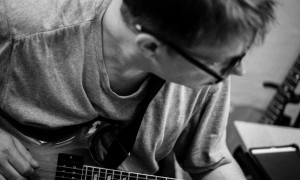 Tom was initially a self-taught guitarist, who started out playing in various bands in the London scene in the mid 1980′s, including as a member of The Sensational Creed, an offshoot of The Associates. He has since played in a number of cover bands and more recently in solo and duo formats at private and corporate events.

His interest in composition and widening musical tastes led to him studying at The Guitar Institute, Goldsmith’s College and completing a music degree in Performance & Production at LCCM in 2012.

Tom is particularly influenced by ambient and filmic music, especially  Brian Eno, Vangelis and David Helpling & Jon Jenkins, as well as timelapse film. The guitarists that have helped to shape his sound include Vinni Reilly (Durutti Column), Pat Metheny, Charlie Burchill (Simple Minds), Robert Fripp, Dave Gilmour and Steve Reid (The Associates), who started Tom off on his musical journey.

Fragments is Tom’s debut release – a 25 minute mini album/ EP of instrumental, ambient, filmic music, which developed out of a final year degree showcase project. The intention is to produce soundscapes that take the listener on a journey and are  visually suggestive, and Tom is also working on creating visual accompaniments to the music. Parts of the album were recorded in Tom’s home studio. Further recording, mixing and additional programming was done at producer Simon Painter’s studio in Farnham, Surrey. Simon has worked with a variety of people, including Carter USM and ambient composer Bob Holroyd.  All instruments were played by  Tom.

Tom also works as a freelance guitar tutor, and is a licensed busker on the London Underground.